Much will be demanded from the production of the future: it’s supposed to be smart, flexible, efficient and sustainable all at the same time. The web-enabled Industry 4.0 promises new paths to meeting the challenges of the future.

Industrial production is facing huge challenges. As customers increasingly design their own articles based on individual requirements, new products come to market faster and faster and with more and more options. At the same time, more goods must be manufactured with steadily dwindling resources, as efficiently and ecologically as possible.

In order to meet these requirements, research and industry are counting on flexible, intelligent automation. The concept: Machines, workpieces, means of transportation and semi-finished goods shouldn’t just contain embedded systems – that is to say, mini-computers – but should also be connected with each other and at least partially to the Internet. They are thus able to independently exchange information and interact with each other, as well as with human beings.

The Fraunhofer study »Manufacturing Activities of the Future – Industry 4.0« targets executives, professionals and consultants in manufacturing and technology-oriented industries. With the help of this guideline study, Fraunhofer IAO aims to transfer knowledge gained in research to practical applications.

A functioning and innovative production sector guarantees the competitiveness of the German economy. This was evident again in recent years as the German economy rapidly recovered from the largest economic crisis since the Second World War. That’s why it will continue to be critical for Germany to maintain the competitiveness of its manufacturing sector and to keep it in the country.

However, fast-moving markets, new globally-acting market participants, customer-specific products and complex production processes demand production systems and employees that are correspondingly more flexible and responsive. At the same time, superior productivity and quality benchmarks must be maintained. The latest technical developments, such as low-cost automation or the use of mobile devices and social media in management and production, promise solutions – the magic word being Industry 4.0. Production is entering an exciting era that will undoubtedly bring many changes.

The basic discussion over work arrangements of the future is taking place more and more within the realm of the knowledge-based economy, an area where modern tools such as computers, mobile devices, social networks and interactive coordination in real-time have already become absolutely essential. Innovative, successful enterprises – startups in particular – keep boosting the use of such modern aids at their offices.

Flexible work arrangements and a new, innovative conceptual understanding of work have become widespread elements of the office routine. The same is true for the targeted use of real-time data to solve problems faster and better. The seamless integration of customers and suppliers into a company’s value creation process is already creating competitive advantages today.

Two movements in particular have influenced developments in manufacturing itself in recent decades. On the one hand, repeatable and automatable tasks have been automated with increasing complexity. On the other hand, robust holistic production concepts have been introduced almost across the board. Both developments – automation and holistic production systems – have reached deep market penetration and dominate contemporary processing industries. 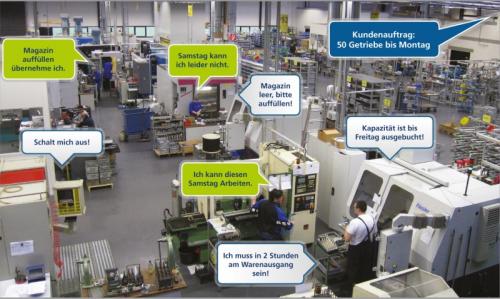 Another factor influencing production work besides the deployment of new technologies is the development of society as a whole. The study identified three points as particularly important and urgent for the production sector:

The Internet is currently moving onto the shop floor. And even though it’s still hard to imagine in many places that conventional control cascades could ever be converted into an Internet of Things or Services, experiences from the knowledge-based economy do show that real-time linkages between multiple objects can indeed spawn new business models.

Not even ten years ago, very few people could have imagined that companies such as Apple, Amazon, Facebook and Google wouldn’t just make money off the Internet but would eventually be valued far higher than even long-established enterprises. Today these four companies are worth over 600 billion euros (stock exchange value as of 30 April 2013). But even in those cases, it has taken a decade to turn visions and ideas into sustainable business models and cash.

A similar trajectory should be expected when it comes to the use of intelligent objects in factories. Most experts agree that manufacturers – especially in high-wage countries such as Germany – must adapt to these new opportunities and use them intelligently in order to remain competitive into the future.

Germany’s starting position is a good one; Germany’s production core is able to compete globally and plays a pioneering role worldwide – and not just in the area of embedded systems. Now it’ll be critically important to expand this innovation advantage further and leverage the Industry 4.0 theme to gain a real competitive edge.

Human labour will continue to play a central role in this process – maybe a bigger role than ever before – ensuring flexibility and productivity and making decisions. Thus, successful production will still depend on qualified and motivated employees.

In 2013, the Fraunhofer IAO launched the “Manufacturing Work 4.0 Innovation Network,” in which industrial enterprises and research partners collaborate on finding answers and solutions for the future of manufacturing work in Germany.