Topic of the month November 2012

From the chainmail vest to the superconductor – The German Wire Museum

Are you “on your toes” (original German literal translation: “on the wire”)? Or have you got “nerves of steel” (“nerves like wire rope”)? Do you occasionally use your bicycle (“wire donkey”) to get from A to B? Images associated with “wire” have long since been a part of our language, because wire is to be found in all areas of our daily lives. Even in places you don’t suspect.

Wire is more than twisted metal. Wire has a past and a future and is of major significance for nearly everything we almost take for granted today. 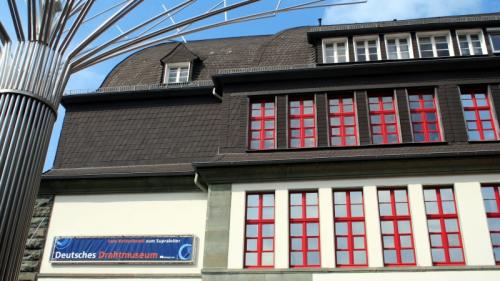 
The German Wire Museum (Deutsches Drahtmuseum) in Altena presents graphic information on all aspects of wire. There, under the motto “From the chainmail (vest) to the superconductor”, the technical history of wire is just as much a theme as its social, economic and cultural past.

The museum is presenting an exhibition designed to shed more light for everyone on a key part of modern life. And it is clearly illustrating how the manufacture of wire has further developed and become more refined – starting with the blood, sweat and toil involved in drawing wire with elbow grease through a drawing die in different diameters until the required thickness is achieved. Here visitors can test themselves to see how much strength and energy was needed to draw wire using muscle power. Visitors will then also recognize that this is what made wire a very rare and expensive commodity in those days.

Among others 19thcentury water-powered draw benches are then used to clearly show how water power played a decisive role in facilitating wire production.

The highlight is however a fully operational industrial wire-drawing works with drawing machines dating from 1920 to 1952. On guided tours, which are provided free of charge on every 1st Sunday in the month, they are even operated by experienced wire-drawers. So in other words, even to this day, the museum is the place to be for wire still properly drawn.

But the exhibition is not least also dedicated to the people who were and are involved with the production of wire. A large number of themes are covered: the various activities of the wire-drawers, industrial safety and accident prevention, control and organization of labour, wages and company social policy, child labour and training, salaried staff and entrepreneurs and the worldwide marketing of German wire products.

A separate section is dedicated to the theme of jewellery and personal body protection. Here wire’s earliest areas of application are presented, because as early as 5,000 years ago, the Egyptians were employing various techniques to make gold wires and then use them to make items of jewellery.

But wire also had great significance as a physical protection element. Since the 5th century BC, the chainmail vest made of iron wire had for a long time been the most important piece of body armour for soldiers and warriors. In this connection, thousands of iron rings were interwoven to form chainmail armour plating. A chainmail vest dating from the 14th century is one of the showcase exhibits in this section. 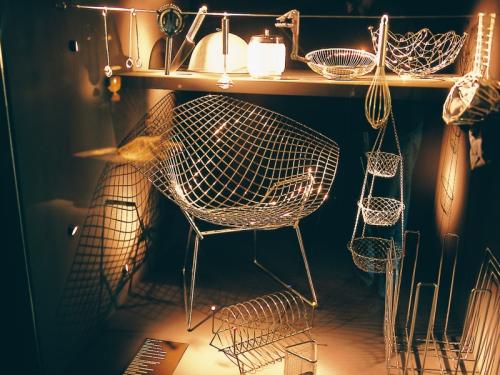 
Taking these two traditional applications as the starting point, with an unconventional assortment, the exhibition is showing wire products which shine in the truest sense of the word: liturgical garments, uniforms, costumes, flags and devotional images – all finished in precious gold and silver wire embroidery, but also Christmas decorations made of laminated wire as well as wire design objects.

But what else can wire do? In a separate room visitors have the opportunity in testing stations to take an active look at the mechanical properties of wire and all the possible applications derived from them for this material. In this connection therefore, they can, among others, learn to distinguish soft and hard wire structures under a microscope, discover the principle of inexhaustible wire threads used in an oversized ball-point pen model and try out the broad area of wire application themselves using many objects which function using wire threads.

We can use wire to give an octave piano - such as Mozart - or a reproduction harp its sound and start up the model of a wire gauze loom or fly a model aeroplane using wire cable control. Even electricity and modern communication would not have developed on the scale we are accustomed to without the use of wire – even if in the meantime communication is mostly on a “wireless” basis, a tiny amount of wire is still used.

In a separate, especially created section exhibits will bring it home to the visitors that key inventions and discoveries, especially in the 19th and 20th centuries, would not have been possible without the use of wire. Here in a playful way, visitors can try out for themselves how wire was and still is used in electrical engineering applications. In this connection for example there are interactive stations which show how the dynamo principle works. Visitors can also learn about the different electrical conductivity levels of wire made of various metals, thermo conductivity of metal, the principle of electro-magnets, measuring of temperatures or sending the Morse code. Today the impression is antiquated, but the realisation of the role wire plays in everyday life and how important wire was in the development of these conveniences in our lives, will amaze the visitors.

To conclude, “the icing on the cake” is provided by the journey through the theme of “Wire and art”. The exhibits here include among others two of the famous nail pictures by Günther Uecker, which mainly consist of wire pins. Here we can see to what extent wire has made inroads into art in various ways: making sculptures look almost weightless, as an element in three-dimensional drawings or as an instrument combined with other materials.

Conclusion: a visit to Altena will generate many aha effects and is definitely not a “(wire) tightrope act”.