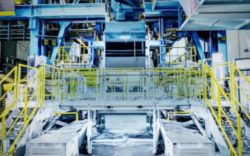 Recently, Austrian steel producer voestalpine placed an order with Primetals Technologies for adapting and expanding the existing electrical, drive, and automation systems as part of the rebuild of hot-dip galvanizing line No. 4 at voestalpines’ steel plant in Linz, Austria. Thanks to this investment, the plant will be able to produce steel grades with higher strengths, improved elongation values, and a wider range of dimensions for the automotive industry.

voestalpine has also tasked Primetals Technologies with the modernization of the electrical and automation systems at hot-dip galvanizing line No. 3. This project will drastically improve drives, CPUs, the fieldbus system, and safety equipment. In addition, integration into the process control system PCS7 will be improved.

By rebuilding and expanding hot-dip galvanizing line No. 4, voestalpine will be able to support the automotive industry in manufacturing even safer cars. The CO2 footprint of automobiles can, at the same time, be reduced by producing lighter car bodies while maintaining the same formability. Primetals Technologies will adapt and expand the existing electrical, drive, and automation systems to meet the new requirements. As part of the contract, Primetals Technologies will also assemble provided components such as power transformers and inductors.

The availability of spare parts is running out for aging drive controls and the automation technology of hot-dip galvanizing line No. 3 at voestalpine’s site in Linz. Therefore, Primetals Technologies was contracted to modernize more than 300 drive feeds, equip the automation units with new CPUs, and install a new fieldbus system. Additionally, the plant’s safety system will be brought up to the latest standards.

A part of the process control system, PCS7, the software library “PTLib”, developed by Primetals Technologies, will be used for both plants. PTLib contains numerous function blocks for treatment plants and is continuously maintained, upgraded, and versioned to match the PCS7 versions. Meticulously p

lanned pit stops The entire modernization and conversion work on the two hot-dip galvanizing lines is carried out during planned shutdown periods. The time frame is only a few days in length.

These “pit stops” require meticulous preparations and perfect coordination of all staff involved. As far as possible, technical problems must be identified and avoided in advance.

In this project, experience gained from many years of collaboration between voestalpine and Primetals Technologies during numerous modernization projects for strip processing lines will be utilized. In the early 2000s, the two hot-dip galvanizing lines were assembled and equipped with electrics, drive technology, strip travel mechanics, and automation. Over the years, the Simatic PCS7 system, among other systems, was continuously upgraded.