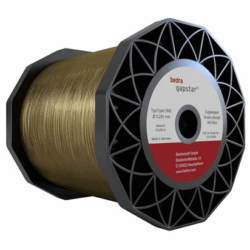 Wire manufacturer Berkenhoff, one of the leading providers of wires for the electrical discharge machining of workpieces, has launched a new EDM wire generation under the brand name TRIMPAC. This consists of wire versions gapstar ONE.9 and gapstar ONE.5, which differ from each other only in terms of their strength – and therefore also in their elongation behavior. The wires achieve significantly higher cutting performance than any other standard wires for spark erosion produced by Berkenhoff under the umbrella brand bedra – while also providing high cutting precision.

During the development of the TRIMPAC EDM wire generation, the strengths of the bedra wire generations cobracut®, broncocut® and topas® were taken into account, which until then had been used as standard wires for wire erosion. The gapstar ONE type wires consist of a brass core (CuZn37) and a sheath with a higher zinc content and structured surface. The sheath is produced using a coating technique known as the TRIMPAC process that has been newly developed by Berkenhoff, for which a patent has been applied. This has a major influence on the eroding properties.

Three effects in one

TRIMPAC stands for "Triple Impact Sheath", which points out that the TRIMPAC coating combines three effects:

1. The wire has a thin oxide layer that acts like a semiconductor and prevents faulty discharges, which improves the cutting quality.

2. The increased zinc content of the sheath increases abrasion, while at the same time improving wear resistance.

3. The surface has a special structure, which has a positive effect on the cutting performance and cutting quality.

As a result of the three effects, wires of the type gapstar ONE achieve significantly higher cutting performance levels than the wires of the predecessors.

As it is possible to show on the basis of trials, the use of gapstar ONE instead of bare brass wire for the same application, taking into account factors such as wire costs, machine costs, wire consumption and cutting performance, results in cost savings of more than 37 percent. With gapstar ONE, considerably higher productivity can be achieved compared to conventional EDM wire, thereby improving the capacity utilization of EDM machines.

The gapstar ONE.9 wire type is a directional high-performance wire for all EDM machines and is intended for standard applications. It has a tensile strength of 900 MPa and an elongation of 1%. Due to its high degree of stiffness, the wire is very well suited for EDM machines that require a directional EDM wire for threading. In the event of a wire break, automatic threading is guaranteed, so that the machines can also work at night without an operator.

The gapstar ONE.5 wire type with a tensile strength of 500 MPa and an elongation of 10% is intended for the machining of conical contours. With both wires it is possible to machine all common cutting heights precisely.

The EDM wires of the gapstar ONE type are intended for mold and tool making, as well as parts production, for example for the machining of punching tools, die casting and injection molds, as well as extrusion tools. Users who have previously worked with bare brass wires or gamma phase coating can use wires from gapstar ONE immediately and without technological assistance. The achievable cutting and surface quality corresponds to what can be achieved with gamma-phase wires – with one to four – or a maximum of five – cuts.