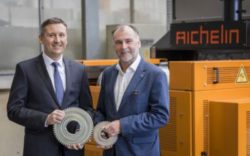 Dipl.-Ing. Christian Grosspointner will take over from Dr. Peter Schobesberger in the coming weeks, taking charge of the future shaping of the global player specializing in heat treatment. Dr. Schobesberger will resign after over 23 years with the company, during which he held various management positions at AICHELIN.

Under his leadership, the group has advanced to one of the largest international heat treatment specialists in the industry. It’s the end of an era at AICHELIN. Dr. Peter Schobesberger, who has overseen the company for 23 years, and who was acting most recently as CEO of AICHELIN Group since 2011, will go in summer 2022. He will, however, remain connected to the company, by becoming part of the advisory board of AICHELIN Holding as of March 2023.

His place as CEO of AICHELIN Holding GmbH will be taken by Dipl.-Ing. Christian Grosspointner. He is a trained industrial engineer with a wide range of experience in the management of manufacturing companies in the mechanical and plant engineering industry as well as in metal processing.

“With Christian Grosspointner, we were able to find an expert with experience in the industry and with proven management qualities, who will continue our successful international path. This succession has been thoroughly planned, and I am very happy to pass on the company to such capable hands,” says Peter Schobesberger, outgoing CEO of AICHELIN Group.

Christian Grosspointner has joined the company in early March; the hand over will be a transition until summer.

“I am very excited to be taking over the management of such a long-established company, and to foster the advancement of AICHELIN Group and its subsidiaries together with such an experienced team,” says Christian Grosspointner.