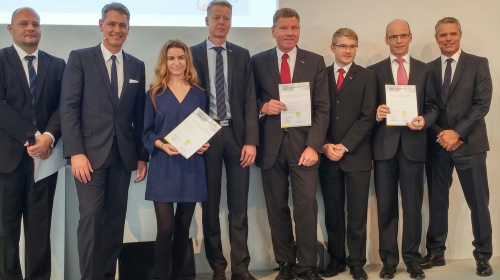 With Triondur® CH, Schaeffler has succeeded in reducing friction losses in the valve trains of passenger cars, thereby cutting CO2 emissions in automobiles by up to two percent. The Triondur® coating system has been around since 2003, and Triondur® CH went into volume production in 2011. Photo © 2014 Schaeffler AG

Schaeffler received the 2014 "Materialica Design + Technology Award" in the "Surface & Technology" category for its new Triondur® CH coating system at this year's Materialica in Munich. This carbon-based coating system received a silver award from the jury, which was made up of high-ranking representatives from science and industry. Using this extremely hard surface coating enables the friction and wear on mechanical tappets used in internal combustion engine valve trains to be significantly reduced.

"Schaeffler's expertise in functional surfaces and coatings is unsurpassed worldwide, and we are delighted that this expertise has been honored with the 2014 Materialica Design + Technology Award", said Schaeffler CTO Prof. Dr.-Ing. Peter Gutzmer.

As hard as diamond

Triondur® CH is a non-hydrogenous, amorphous carbon layer. The extremely hard diamond-like carbon (DLC) layer achieves virtually the same hardness as diamond and thus boasts the highest level of protection against abrasive wear of any Triondur® coating system and, at the same time, maximizes friction reduction.

In the past year, 30 million components with the Triondur® CH coating system were installed in automobiles. This intelligent combination of engine oils and coating systems allows friction in the valve train to be reduced by up to 50 percent, which in turn means that CO2 emissions can be cut by up to two percent. The innovative force and added value for customers and society are down to the coating system's resource-saving development, manufacture, and application, and are reflected by its rapid expansion on the market.

Areas of application in the industrial sector are currently also being opened up: For example, Triondur® CH could be used to coat parts that are subjected to high stresses in oil and gas production applications and in motorcycle valve trains, where research is currently being carried out.

Nanostructured coating systems have frequently been discussed at a laboratory level, but process restrictions have made it virtually impossible to apply them on any kind of mass-production scale. "Systematic developments made during the last ten years have enabled us to offer our customers a system solution that is environmentally friendly and cost-effective both to manufacture and to apply", said Dr. Yashar Musayev, Director Coating Center.

The components that make up a tribological system are generally analyzed individually during friction and wear testing. Schaeffler works systematically and has developed a special simulation model for this purpose. In this systematic procedure, coated components are combined with engine oils in such a way that the lowest possible level of friction and the greatest possible wear resistance are ensured in the trobological system (e.g. cam/tappet). "At Schaeffler, we therefore consider the coatings to be a completely valid design element in tribological systems", explained Dr. Musayev.