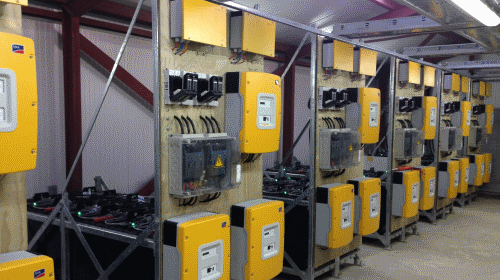 One of the world's biggest off-grid PV system has gone into operation in Afghanistan. The 1 MW solar project brings reliable and sustainable energy to 2,500 homes, businesses and government buildings in the Bamyan province. SMA Solar Technology AG (SMA) delivered 118 Sunny Island inverters to control the off-grid system and 55 Sunny Tripower inverters to convert the direct current produced by the photovoltaic panels into the alternating current necessary for electrical appliances.

The Bamyan province in Central Afghanistan is famous for its giant Buddha statues that were destroyed by the Taliban in 2001. So far, people in this area either relied on small diesel generators or domestic solar panels for their electricity supply or they had no access to electricity at all.

The Bamyan Renewable Energy Programme for the first time brings an electrical system to the communities that provides homes, businesses and government buildings with cost-efficient electricity 24 hours a day. The PV generator of the system is supplemented with a diesel generator and batteries for periods of poor weather.

"The project is not just about solar panels, wires and poles - but also about health, education, economic growth and laying down a foundation for future development to build on," says Tony Woods of SESI.

"To effectively improve the lives of the people in the war stricken country of Afghanistan, it is extremely important to bring a reliable energy supply not only to homes, but also to businesses, hospitals, schools and government buildings.

Photovoltaics is the quickest, most sustainable and cost-effective energy source to achieve this even under harshest conditions," explains Volker Wachenfeld, senior vice president Hybrid & Storage at SMA.