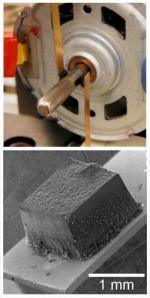 New research from Rice University and the University of Oulu in Oulu, Finland, finds that carbon nanotubes could significantly improve the performance of electrical commutators that are common in electric motors and generators.

The research, which appeared online this month in the journal Advanced Materials, finds that "brush contact" pads made of carbon nanotubes had 10 times less resistance than did the carbon-copper composite brushes commonly used today. Brush contacts are an integral part of "commutators," or spinning electrical switches used in many battery-powered electrical devices, such as cordless drills.

"The findings show that nanotubes have a great deal of practical relevance as brush contacts," said lead researcher Pulickel Ajayan, Rice's Benjamin M. and Mary Greenwood Anderson Professor in Mechanical Engineering and Materials Science. "The technology is widely used in industry, both in consumer gadgets as well as larger electrical machinery, so this could be a very interesting, near-term application for nanotubes." The combination of mechanical and electrical properties of nanotubes makes this possible.

Because of these properties, the researchers decided to test nanotubes as brush contacts. Brush contacts are conducting pads held against a spinning metal disc or rod by spring-loaded arms. Current is passed from the spinning disc through the brush contacts to other parts of the device.

To test the feasibility of using carbon nanotube brush contacts, the research team replaced the ordinary copper-carbon composite brushes of an electric motor with small blocks that contain millions of carbon nanotubes. Under an electron microscope, these millimeter-square blocks look like a tightly packed forest.

From Ajayan's previous work, the team knew that these nanotube forests react something like a "memory foam" pillow; they regain their shape very quickly after they are compressed.

"This elasticity is something that's not found in existing composites that are used for brush contacts, and that's the essence of why the nanotube brush contacts perform better: They keep much more of their surface area in contact with the spinning disc," said Robert Vajtai, faculty fellow at Rice. Vajtai worked on the study with Ajayan and a group of researchers in Finland led by University of Oulu Researcher Krisztian Kordas.

The team believes that the improved contact between the surface of the spinning disc and the brush accounts for the 90 percent reduction in lost energy.

Support for the research was provided by the Academy of Finland, the University of Oulu's Micro and Nanotechnology Center, the Air Force Office of Scientific Research and the Semiconductor Research Corporation.