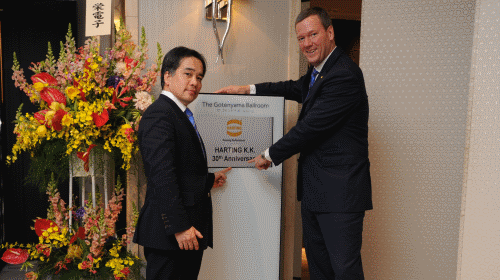 Looking back with pride on 30 years of HARTING Japan: Chairman of the Board Philip Harting (right) and Managing Director Kenji Nogata © 2016 HARTING KGaA

It is precisely 30 years since the HARTING Technology Group founded a subsidiary in the Japanese capital of Tokyo. The Japanese subsidiary HARTING K. K. has since proven a resounding success, as Philip Harting, Chairman of the Board and President/Partner, underlined at the celebrations.

“Founding a subsidiary here in Japan in 1985 was the right decision. Japan was the leading economic superpower at that time. Even back then it was clear that the Asian region offered enormous growth potential for HARTING,” remarked Philip Harting at the event in Tokyo.

Kenji Nogata, Managing Director of HARTING K. K., sees continuing strong growth opportunities for the coming years. “We are well represented in the mechanical engineering, robotics and railway technology markets. We aim to further expand our market share in these sectors,” Nogata indicated.

HARTING is represented nationwide in the land of the rising sun via a sales network. In addition to the subsidiary in Yokohama, the Technology Group also has offices in Chubu (central Japan), Kansai (western Japan) and Kyushu (southern Japan).