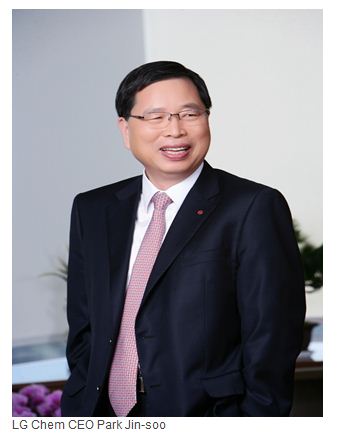 “By constantly increasing investment in R&D, LG Chem will seek to maintain its leadership in the world’s materials markets,” the chief executive said at a press meeting in Seoul last Friday.

“It is not a far-fetched idea to realize the 30 trillion won sales goal,” he said, predicting that the chemical firm’s sales revenue will surpass 24 trillion won this year.

To attain its business objectives, LG Chem will work to buttress its flagship business sectors including petrochemicals, information and electronic materials, and battery businesses.

In the petrochemical sector, from which around 70 percent of the Korean chemical firm’s sales come, the company will promote businesses for synthetic absorbable polymers, synthetic rubber, engineering plastic, and highly efficient and environment-friendly businesses including carbon nanotubes and CO2 plastics.

The CEO also promised that the firm will successfully complete the construction of factory lines for ethane gas in Kazakhstan.

As for the information and electronic materials business, he said the firm aimed to retain its lead in the world’s market for liquid crystal display materials such as polarizers and 3D film-type patterned retarders.

The company will also try to increase its presence in the global organic light-emitting diode lighting market.

On the battery business front, LG Chem will deploy stepped batteries and cable batteries for flexible and mobile and wearable products down the road.

Park showed his confidence to cement the leading position in the world’s battery market for electronic vehicles.

“LG Chem, which is scheduled to collaborate with more global car makers in developing electronic cars, will develop battery cells that could power vehicles to drive as far as 500 kilometers in 10 years,” he said.

When asked about Tesla and Panasonic’s plans to build a battery plant in the U.S., he said that the impact on LG Chem’s electric car battery business would be limited.

The Korean battery maker, meanwhile, is mulling setting up factory lines for electric car batteries in China, one of the global markets brimming with growth potential.

The electric car market will be wide open in the nation as environmental issues such as toxic smog have raised public concerns, according to the firm.