AIM, Inc, Honored with exporter of the year Award 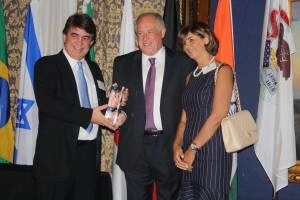 CHICAGO, IL July 31, 2013 – Governor Pat Quinn today congratulated a dozen companies and organizations chosen to receive the 2013 Governor’s Export Awards for outstanding accomplishments in the export of Illinois goods and services around the globe.

Illinois is the largest exporting state in the Midwest and the fifth largest in the U.S. Exports from Illinois rose 5.1 percent to $68.1 billion in 2012 after soaring 30 percent in 2011. Direct exports account for nearly 10 percent of the Gross State Product.

AIM, Inc. would like to extend its gratitude to our customers for helping us achieve the honor of “Exporter of the Year”. On Wednesday night, executive members of Automated Industrial Machinery, Inc. shook hands with the Illinois Governor Pat Quinn at the Union League Club of Chicago as they were presented with the award that signified an amazing year for our growing company.